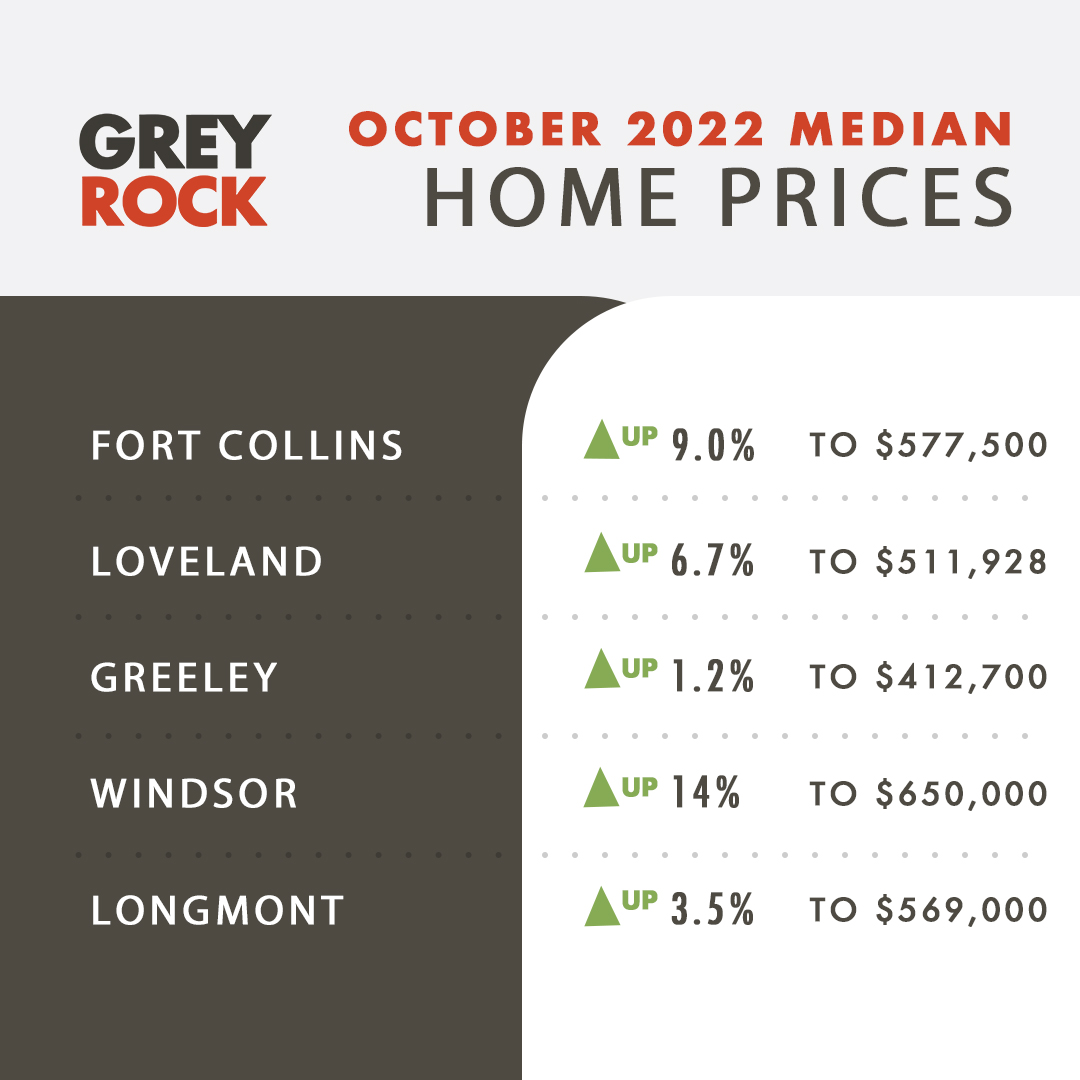 Despite 7% mortgage rates and more doomsday headlines than you can count, the market remains active enough to keep prices stable. In August our median price fell about 4%, then ticked back up slightly in September and basically remained unchanged in October.

Larimer County’s median price for a single-family home sits at $567,000 which is 9% higher than this time last year.

Weld County has a median price of $486,000 which is 3.4% higher than last year. But, Weld County is a large geographic area with lots of rural real estate. If you look at sub-markets like Windsor, the numbers are much stronger. There the median price is $615,000, only 2% off of its all-time high and 10% higher than this time last year. The average home in NOCO sits on the market for about 40 days before receiving an offer and sells for 98% of list price.

The only stats that dramatically show the impact of the slowdown is the number of homes for sale which is 70% higher than it was last year. But inventory levels are still about the same as they were in 2020, and far less than in 2019. As we’ve said in previous reports, this shows how difficult a problem the housing shortage is. High rates do not solve the fundamental housing problem in America which is low supply relative to the record number of household formations.

In the last few months, we have had instances where we knocked $120,000 off the list price of a home. But we have also had listings sell for $90,000 OVER the list price. We’ve sold $1.7 million homes in a week, and we’ve had homes in the $600k range sit unsold for 4 months. Proper pricing is critical right now. Sellers that are pricing attractively are selling without trouble. While those reaching for that little extra are sitting and waiting and wondering why showings are so few and far between.

There is a lot of discussion in the industry about mortgage buy-down products of all kinds. Everything from traditional long-term buy downs that keep your rate fixed for the life of the loan, to short-term buy downs that keep your rate low for 2 or 3 years and then adjust back up to the market rate after that. For example, you could negotiate to have the seller credit you $10,000 of the sale price towards a mortgage rate buydown. If the par rate is 7% and you wanted to buy the rate down for the life of the loan, you could get a rate of around 6.5% on a $500,000 loan. But, if you bank on rates falling significantly in the next 2 years, you might opt for a short-term 2-1 buydown. This would allow that same $10,000 credit to bring your rate to 5% in the first year, 6% in the second year, and 7% for the remaining 28 years. The hope there is that rates will fall back down to 5% within the next 2 years and a refinance could occur before the rate hits 7% in year 3.

The FED is predicting a recession next year and if that occurs, rates should fall. It is being said that the housing market went into a recession in June of this year. But the rest of the economy has been more stubborn to react to the rate hikes. That may be changing. I’m writing this report on Nov 10th and today jobless claims came in higher than expected. Also, inflation data came in lower than expected. This caused a big drop in mortgage rates bringing them from about 7% down to 6.6%. It’s likely that we are nearing the end of the FED rate hikes. Once unemployment hits 4.4% expect the FED’s posture to change and rates to fall. Right now unemployment is at 3.7%. Many believe that mortgage rates will be in the mid-5% range by the third quarter of 2023. But of course, no one knows for sure.

What we do know is that the NoCo market is showing stupefying resilience amidst the current interest rate environment. It has occurred to me that the 4% price correction we saw in late summer this year is about the same correction our area experienced during the 2008 crisis. It’s worth noting that during that same period, Phoenix lost about 32% of its home price.

Of course, prices were much lower back then but the average homeowner’s ability to pay their mortgage was far worse. Right now, the percentage of the average existing homeowner’s disposable income that’s being spent on their mortgage is about half of what it was in 2008. Of course, that does not mean that housing is more affordable right now, it simply means existing homeowners have a much easier time making their payments today than they did back then. This is due to wage growth combined with the incredibly low mortgage rates in recent years. Also, the mortgage reform laws that occurred in 2010 as a result of the 2008 crisis have eliminated high-risk lending practices. All these factors combined have created the highest quality homeowners we have seen in our lifetime.  So, when the next job loss recession does occur, the impact on the real estate market will be much milder than what we experienced in 2008.

Thank you for taking the time to read this report! To all of our past and current clients, your trust means the world to us! Please reach out if you’d like to discuss the market further or just catch up.

Visit me on Instagram - opens in a new tab